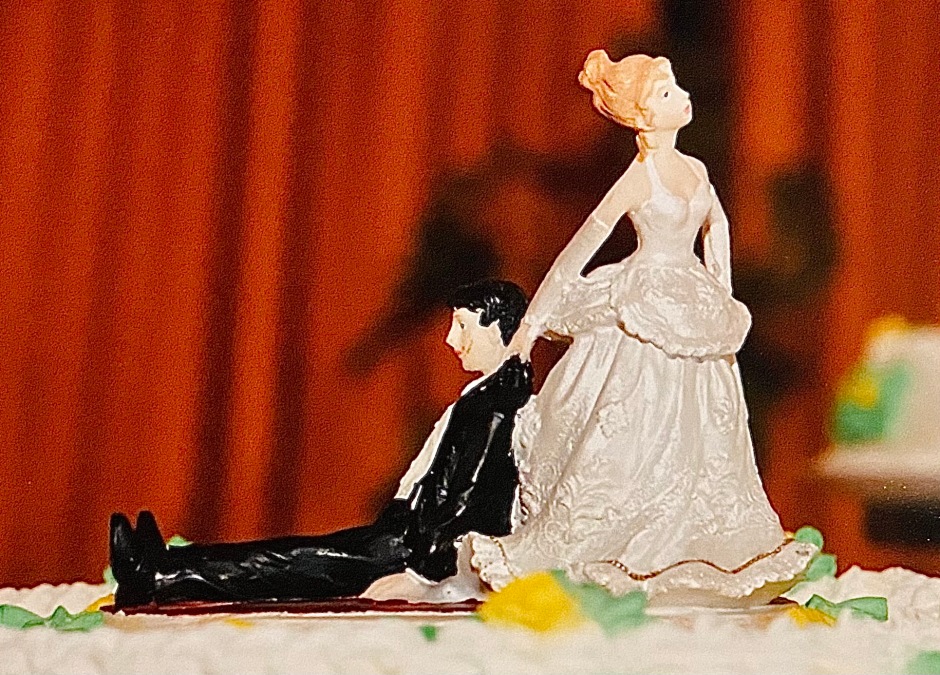 Marriage is tough. Couples who are in it for the long-haul know maintaining a committed relationship—that not only lasts but thrives—takes a great deal of effort.

Every day this week, someone’s anniversary has popped up in my social media feed. Supporters love and like the post and photos and send positive vibes and blessings the couple’s way. Wishing another couple a happy anniversary is like joining their cheering squad. Marriage isn’t for the faint of heart.

Today, my mother and her husband celebrate their 7th wedding anniversary, and I am one of that couple’s biggest fans.

Mom and Tom chose to tie the knot exactly 50 years to the day that my grandmother and grandfather Westhusin were wed. I wish my grandparents had lived to see their daughter marry her soulmate. Like me, my grandparents would have been ecstatic.

After a civil ceremony, Mom and Tom traveled nearly three hours to the same tiny, rural Kansas chapel where my grandparents were married. To my mother’s surprise, her new husband had organized in advance to have the church open for them. The rustic building, not far from the farmhouse where my grandmother grew up, served as the starting point for the newlyweds’ promise to love and cherish one another “till death do us part.” Standing on the same ground as her mother stood five decades earlier, my mother committed to her fourth husband.

Yes, you read that right. Fourth.

My mom got married straight out of high school, and her first union soon fizzled. She arrived on her parents’ doorstep unaware she was carrying more than a suitcase full of clothes. She was carrying her cheating ex-husband’s child.

My brother was a few months old when my parents met.

A single mom and a man who believed he might not be able to have kids of his own tied the knot despite relationship red flags and the protests of both her parents. My mother and father would go on to have four more kids and spend another 18 years torturing each other, before finally ending a toxic marriage that probably never should have begun. I was seventeen at that point and had witnessed the whole messy thing.

My grandparents, unfortunately, didn’t live long enough to see the end. They did hold their daughter’s hand through the greater part of my mom’s journey, and they supported her in every way possible. I believe, they held on hope that the marriage could turn a corner.

My grandparents had battled through military and work separations, moving halfway across America to start a new life in California with two small children, raising a family despite alcohol addiction, and supporting kids and grandkids in the face of heart disease, cancer, and stroke. They went to bed together each night and to church together each Sunday. Their beginning had been messy, but their ending was a happy one. In between, they celebrated 36 anniversaries.

When I was in bootcamp, my mom and her next husband got hitched. Most people jokingly said the third time would be the charm. I liked the fact she had found a man who treated her kindly and seemed to value her, but I had suspicions her new husband had a lot more layers than the sugar coating on top. Sure enough, husband #3’s past came to light, and his true nature revealed itself over the next ten years. He was a liar with numerous children from various women, and his cheating days were far from over.

Luckily, my mother escaped before things got too ugly. She also held on hope that her greatest love was out there. Enter Tom.

The way my mother tells the story, she knew after their first date she wanted to marry Tom. My sister—who was living with Mom at the time and was worried sick she hadn’t returned from her internet date for over six hours—simply rolled her eyes at our mother’s revelation and subsequent swooning.

All of us kids had our doubts, I suppose. Mom had fallen fast and hard for husband #3, too. In time, however, all parties involved would come to realize Mom had met her match, and our families joined forces. At the time, there were seven kids and four grandkids between them. We’ve since grown exponentially and they are thoroughly enjoying the chaos that comes with a big family.

Never before has my mother had a partner reflect her drive, passion, intelligence, integrity, and immense commitment to their children as Tom does. With no seven-year itching in sight, I’m so proud to report, she has never been happier.

My mother’s success in love has always reminded me of another epic love story. Like Mom, my Great Aunt Alice got out of a very toxic marriage with a boat load of kids, and she fell for my Uncle Ed by the end of a marathon conversation on their first real date. They raised ten kids together and will be celebrating their 44th wedding anniversary later this month.

My mother was 39 years old when she divorced my dad.

My Aunt Alice was married to her first husband for 14 years, before she said enough is enough.

I am 39 years old, and, after 14 years of marriage, I am saying enough is enough.

When my anniversary arrived in June, my husband and I had nothing left to celebrate. We didn’t wish each other a happy anniversary once. After a long, drawn out discussion that evening about how we’ve failed in our marriage, I said, “Why don’t we fake it till we make it?”

We only made it a few more weeks before the curtain on our charade was pulled back, and I was unable to fake it any longer.

We’ve existed in the same space for years without love. Sure, I pretend when I feel up to it. I put on a brave face on social media and boast of the few kindnesses he shows me in between the heartbreaks. If you look more closely, though, you’ll see the Facebook post I made about the causes of depression the day before my anniversary, and the glowing post about unconditional love I made to this blog the day after our anniversary.

For fourteen years, I have cycled through the same feelings. I have convinced myself time and time again that we could be happy if I just tried harder, prayed harder, worked harder. I understand that marriage is tough. I’ve seen it with my own eyes!

Instead of letting the neglect and lies destroy me, I wore anger like a shield. With help from my friends and my faith, I performed triage on my heart each time it was broken, and I refused to give up. I had vowed before God, “till death do us part,” and I meant it. Each time I was betrayed, my shield became thicker. To the world, I just seemed angrier.

Like my mother throughout the entirety of my childhood, I went into survival mode trying to hold it all together and it got ugly. There are many things I’ve done that I regret, but I don’t regret holding on this long. God had a purpose for all this, and I think my mother and my aunt would agree, it was to bring our amazing children into this world. Our babies are worth every bit of the pain.

Armed with the knowledge that I misinterpreted unconditional love for an unconditional commitment to a facade, I’m ready to lay down my shield. The rose-colored glasses are gone. I felt I was fighting the good fight, but there is not enough therapy in the world to change certain hard truths. We have been living a lie. After years of us both trying to force what cannot be, I feel dead inside, so it’s time to part.

I remember telling my best friend over a year and a half ago, “I don’t even know what joy is anymore.”

That’s what happens when you’re trapped in a loveless marriage.

That’s what happens when you fake it.

All I know is my daughters deserve to see their mother happy.

I waited a long time to see my mother truly happy, and I hope to demonstrate to my girls what a healthy relationship looks like at a much younger age.

Either way, Mom and Aunt Alice promise me the kids and I will be better-off in the end. I trust their wisdom and their lived experiences. They believe in me, and, thanks to their journeys, I still believe in love.

To the couples out there still fighting the good fight—especially, Mom and Tom—I wish you the happiest of anniversaries and abundant blessings for many more years to come.

All marriages are bumpy rides, some can turn corners, and others never should have turned over the key in the ignition. I hope your co-pilot compliments you in the best ways, brings you immense joy, and together you stay committed to the journey. I hope the only shields you have to exist behind are windshields and you’re headed in a wonderful direction.

May your commitment to loving one another be as strong and true as the day you took your vows.

One thought on “Why Do We Wish Each Other Happy Anniversary?”